The Old Manse
5 to 13.3.’05
Dear All
Only last year I noticed I hadn’t written a newsletter in ages,
so, pausing only to gather my thoughts, and visit a few places
that might interest a few people, I put pen to virtual paper.
I thought I’d start now and work my way into the past in a series of giant random leaps.
Today (5th March) here in Scotland, where it is often sunny but occasionally cold, I looked out of the bedroom window and thought it looked a little too cold outside to contemplate garden matters in situ, and that it was warmer inside.
While I looked I saw Maggie, our cat, change her mind, something not often observed.
To set the scene, there was a bright, clear blue sky with just a few of those fluffy white clouds on the horizon that seem perhaps, just a little more solid than they might be. You'll know them if you have visited. It was one of those days when one might be standing in the garden thinking of those things one might do, like doing some gardening, not just now, but soon and possibly this weekend and in the meantime just standing in the sunlight, thinking. For Maggie her reason was, no doubt, more cat-like. She was sitting in the place that she had decided she should be. This is why a cat is always right.
With little warning, the welcome rays were interrupted as though God had dropped the lid, and the sudden darkening was accompanied by a significant drop in temperature. She looked around for something to lacerate, but, before a target presented itself, a blizzard came round the corner of the house, fully developed and looking for trouble.
Maggie, as I watched, changed her mind about the place to be, and moved, giving the impression of an elasticated shadow. However she was several yards from the cat-flap, and the snow unkindly painted her white on one side.
A short while later, there was an unhappy cat in the kitchen, or rather two, since her son Errol was there, warm, content and not at all blizzarded. There followed a discussion about filial duty and the fairness of life, it involved a lot of the "scream and leap" style of argument and loosened a few carpet tiles.
A few minutes ago I was thinking that, if dressed warmly, I might stand in the sun and not do any gardening. Now the snow is passing the window horizontally.
It looks like the Enterprise at warp999 (little trekkie reference there for the devotee). As a result of this inclement weather I decided to stay indoors and to start the next newsletter. I suppose it's not really a newsletter if it's just collected ramblings, opinions and gossip, so I'll put a few bits of news in it.
Come to think of it, there are a few newspapers that wouldn’t qualify on that basis.
Projects.
The garage is up and weatherproof, There are a few pictures on the projects page of our website, http://jimhewlett.homestead.com .
We’ve started the planning stage of the new conservatory. Its purpose is to gather a bit of the afternoon sun and to warm the south end of the house in winter. Hopefully it will bring a bit more light into the living room as well.
The garden fence has been driven back twenty feet and the ground cleared, exposing a lot of foundations, concrete, and rubble from the houses that stood there before. Convenient really because I’ll need a bit of rubble to firm up the ground where the new drive will go.
The caravan has a hardstanding space to sit on. A roof would be nice but it’ll have to do for now.
Travel
In the middle of November ‘04 Fiona’s planning came to fruition and we set off to Egypt with a view to seeing what a desert was like and peering at the odd sphinx. The trip was based around a tour organised by a company called Kumuka, they provide a lorry with a sort of coach body on top, along with tents, food, and all the necessaries like a driver and an expedition leader. Of the tourists there were about twenty of us, mostly Aussies and Kiwis, and they were all less than forty and more than twenty. So I felt a bit old, well actually I didn’t, but played on it so that when there were some real beds to sleep on, we got them.
Fiona’s planning and organising was well worth the effort, late in the year seems a good time, I wouldn't try later we found at the end of November a nice balance between crowds and cold, even in Egypt it does get cold, eventually, at night and especially in the desert. October might be worth trying. In the high season it gets very crowded. And hot.
High points, 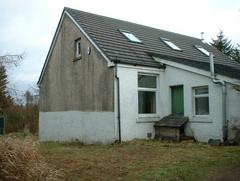 The scruffy end, awaiting a coat of paint and a conservatory 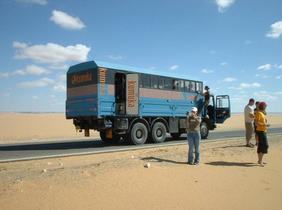